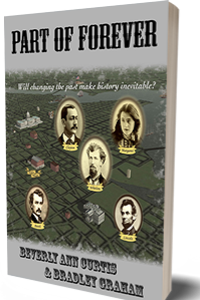 What begins as a discovery of some human bones at a Washington D. C. construction site, propels homicide detective Roy Barnett and his son Clayton through a mystery-adventure dating all the way to the Civil War and back again. The bones are too old for a recent homicide, but it's Roy Barnett's "first case," and he won't let it go. For years he probes for clues to the victim's identity, connecting him to a Pinkerton detective who never lost his man and an old photograph with someone who looks vaguely familiar, wearing a very old suit. When he retires to Las Vegas, Roy Barnett's first murder case is still unsolved.

Roy's son Clayton couldn't be more different from his father and their relationship is strained. Clay is an aspiring actor who lands a part in a Civil War movie, filming in Gettysburg. Borrowing his father's mysterious photo, the wardrobe department prepares a suit to match, and Clay wears it as he gets his "likeness" taken at a local period-photography studio. The photographer uses an old daguerreotype camera, and Clayton, still holding his glass negative, is sent back to April 14, 1865 – the day Lincoln is assassinated. Shocked and bewildered, Clay calls on his acting skills to fit in with people from another century. Warming to his own performance, he decides to change history, and runs to the local train station in order to get to Ford’s Theatre that night, in time to save the President.

Clayton’s quick reactions at the station prevent a little boy from falling into the path of the arriving train and Clayton is an instant hero; people offer to buy his ticket to Washington. On the train Clay meets Margaret Wells, who is traveling to see Lincoln in order to free her brother from prison in Ohio. Terrence Whitlow, a Pinkerton detective who suspects her of southern sympathies, is shadowing Margaret. During the trip, Whitlow overhears part of Clayton’s secret story that the President is going to be killed that evening. He suspects Clayton of being part of the plot and arrests them both. With the help of an unscrupulous bounty-jumper, Philip Elles, Clay and Margaret escape. Together they head for the theatre, detective Whitlow hot on their trail. The stage door opens, hitting Clayton’s glass negative, breaking it. When he picks it up Clayton has returned to our own time, despondent over his failure to save the President.

Margaret Wells, meanwhile, must confront the detective alone. Lincoln is killed that night. In a jailhouse battle of wits, Margaret turns the tables on Whitlow, bargaining for her freedom and the release of her brother, while promising not to reveal Whitlow's prior knowledge of the assassination. Margaret returns home, wondering whatever happened to the handsome stranger who saved the little boy in Gettysburg, but proud that a woman can achieve something meaningful in the male-dominated world of her own time. Whitlow, in a last act of frustration, finds and kills Philip Elles, and begins a lifelong search to locate Clayton Barnett. Margaret's last warning to Whitlow: "you'll never find him."

Clayton, now back in the twenty-first century, has changed. He has evidence for his father's "first case" murder mystery, answers about the unknown man in the old photograph, and clues about Detective Whitlow's connection to the puzzle. The father and son relationship grows and together they solve each other's mysteries. The bones belong to Phillip Elles, the man in the old photo is Clayton, and Terence Whitlow didn't always get his man.

One year after returning to his own century Clay is still troubled about his foray beyond the boundaries of time. There’s the sense that he didn’t make difference in 1865 and that he missed his chance to prevent a terrible tragedy, and save a president. But Clay’s father will have something to say about that. It’s April 14, and Roy has the best birthday present that Clay can imagine. Will changing the past make history inevitable? Clay is about to find out.